You are here: Home / News / Rains wiped out only drought area in the state 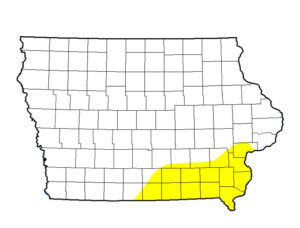 The area in yellow on the Drought Monitor Map is “abnormally dry.”

Drought watchers in the state can relax as the recent rains have washed away the moderate drought conditions that had crept into one corner of Iowa.

The Iowa DNR’s Tim Hall helps compile the state water summary. “We were watching with some concern — southeastern Iowa over the last couple of months — and the rainfall trends have been favorable for that part of the state. And now there’s just a little patch of what the Drought Mitigation Center calls abnormally dry,” Hall says.

Hall says the moderate drought had moved in as states to the south, like Missouri, Kansas and Texas were experiencing much more serious drought conditions.

“The relief that we’ve seen from the moderate drought in southern Iowa is really just an extension of vastly improving conditions to our south, so those states are looking much better too,” Hall says. “They were farther in the hole than we were, so it’s going to take them back to normal conditions, but they too are moving in the right direction.”

The rain has been spread out the last couple of weeks and to the dismay of Iowans, the cloudy conditions kept the sun under wraps. Hall says that extended time period is a good thing for the water table.

“This rainfall, because it has come over a longer period of time and has been fairly moderate in intensity, has been really good for replenishing shallow groundwater and soil moisture,” he says. “That’s a long-term benefit that’s really going to work in our favor.” Stream flows have risen to just above normal and Hall says overall conditions are pretty good for spring.

“We always want to keep an eye on local heavy rainfall events — but right now we’re kind of in a really nice middle-of-the-road position — where it’s not drought and it’s not flooding. We’re kind of right where we want to be going into spring,” Hall says.

For more on the water summary, go online to www.iowadnr.gov/watersummaryupdate.