You are here: Home / Human Interest / Ashton Kutcher says good character ‘is like your DNA’ 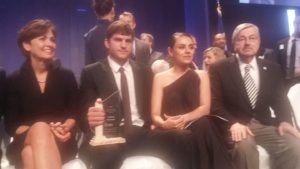 “Thank you for having me home,” Kutcher said as he took the stage at Saturday’s ceremony in West Des Moines.

The actor who has starred in “That ’70s Show” and the current Netflix series “The Ranch” relied on some of the biochemistry he studied at the University of Iowa to explain the difference between personality and character.

Kutcher thanked his wife, his parents, his scoutmaster, his teachers and the neighbors from his childhood for their influence on his character.

Kutcher also talked about how his twin brother, Michael, has influenced his life.

“My brother was born with cerebral palsy and he taught me that loving people isn’t a choice and that people aren’t actually all created equal,” Kutcher said. “…We’re all created incredibly inequal to one another in our capabilities and what we can do and how we think and what we see, but we all have the equal capacity to love one another…He also taught me that he had gifts that I didn’t have…and that every time I felt sorry for him in life, I made him less.”

Kutcher, who is now 39 and the father of two young children, told his parents that with the experience of being a parent, he finally realized how much his own parents loved him.

“And so actually I didn’t come here, ultimately, to receive this award for myself,” Kutcher said. “I came here to receive it for all of you.”

Kutcher has become known as an entrepreneur, investor and philanthropist in addition to his work as an actor. He recently testified against human trafficking during a congressional hearing. Kutcher and his ex-wife, Demi Moore, co-founded a non-profit called “Thorn” that fights “the sexual exploitation of children.”