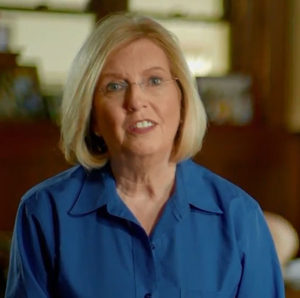 A Democrat who served the past two years as chairwoman of the Iowa Democratic Party has announced she’s running for governor. Andy McGuire released a video message early this  morning.

“For too long, those in power seem to only get things done for the special interests, behind closed doors,” McGuire said as she narrated the video. “It’s a broken political system that works for them, not us.”

Two other Democrats — Polk County Conservation director Rich Leopold and former Des Moines School Board member Jon Neiderbach — have also launched campaigns for governor. McGuire, the latest entrant in the 2018 race, is a medical doctor and the former executive of a health insurance company.

In the news release announcing her candidacy, McGuire said policymakers should “ensure access to quality, comprehensive affordable health care for all Iowans.” She also called for a statewide minimum wage increase, equal pay for women and investments in Iowa’s public schools — rather than cutting them “to the bone.”

“We’ve got the best, brightest, most hard-working people here in Iowa. All we’re looking for is a fair shot,” McGuire said in the video. “Instead, all we’ve gotten are broken promises and a broken economy.”

McGuire grew up in Waterloo. She and her husband live in Des Moines. They are the parents of seven children.

McGuire also announced some endorsements today from women who’ve run for governor themselves. She has the backing of Bonnie Campbell and Roxanne Conlin, two women who were the Democratic Party’s nominees for governor in 1982 and 1994 and lost to Republican Terry Branstad.