You are here: Home / Fires/Accidents/Disasters / Investigators look for clues in plane crash that left two dead near Oxford 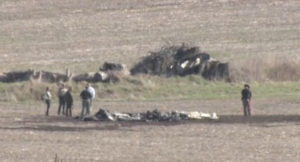 Two people died when this plane crashed near Oxford.

Investigators are still looking for the cause of an airplane crash Friday that killed two eastern Iowa.

The plane — a single engine, 1965 Piper Cherokee 180 — crashed in a field near Oxford shortly after 3 p.m. Friday. It was on fire when authorities arrived on the scene. 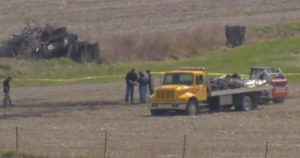 Crews remove the plane from the crash area.

The plane had taken off from the Green Castle Airport in Iowa City. Koehn was a board member on the Green Castle Aero Club and he was a longtime Coralville police officer. The Federal Aviation Administration (FAA) and National Transportation Safety Board (NTSB) are investigating the crash.

“Terry gave much to his family, community, and church, and especially enjoyed time he spent with his grandson, Liam.” KCRG-TV also reached out to Spicer’s family. They declined to comment.