You are here: Home / Health / Medicine / Bill sends an alert to pregnant women about CMV 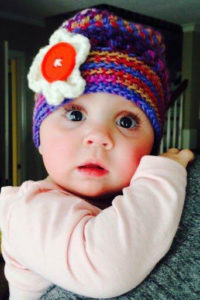 A nurse and her husband sat quietly crying in an Iowa House balcony late last week as a bill inspired by their daughter cleared its final legislative hurdle.

Amanda Devereaux of Des Moines contracted a virus known by the initials CMV when she was pregnant. As a result, her 18-month-old daughter Pippa cannot walk, talk or feed herself and is undergoing physical therapy.

A bill that now has cleared the Iowa House and Senate unanimously would require hearing tests for newborns, since hearing loss is an indicator a baby may have contracted cytomegalovirus or CMV in the womb. In addition, the state will provide doctors with information to pass along to pregnant women about the dangers of CMV. 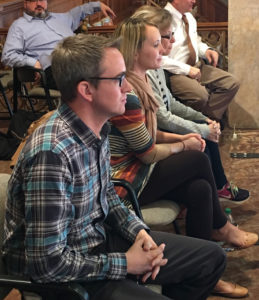 Paul and Amanda Devereaux, along with Pippa’s grandmother Judy, watch from the House balcony.

It’s a common virus. By the age of five, about one-in-three kids have had it.

“If I had known when I was pregnant that I could catch something from my toddler that would harm my unborn children, I think I would have done things differently,” she said, “but I just had no idea.”

Devereaux caught CMV from her toddler, who was in day care.

“I would kiss him on the lips. I would share drinks with him,” Devereaux said. “I didn’t really realize that I could actually do my second child so much harm just by doing things that families do.”

Devereaux hopes by telling her story — and having this bill become law — more pregnant women with toddlers will take precautions to avoid catching CMV.

“I’m a nurse,” Devereaux said. “I know a lot of things about staying healthy and I didn’t know about this.”

According to the National CMV Foundation, only nine percent of pregnant women know about the virus. Each year, about 40,000 babies in the U.S. are infected with CMV before birth.

Experts say women who’ve had the virus before they’re pregnant aren’t at risk of passing it along to their babies. However, if a woman contracts it for the first time during the first trimester of a pregnancy, that’s when the brain and other major organs are developing. That’s when the virus can cause devastating abnormalities.