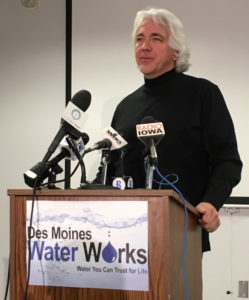 The manager of the Des Moines Water Works says the organization will not appeal after losing two court decisions in its lawsuit against agricultural drainage districts in three northwest Iowa counties.

Waterworks CEO Bill Stowe says they decided at the recent Water Works board meeting to not take any more legal action.

“We reached that conclusion with great difficulty, but with great resolve to keep our message alive in protecting environmental quality in this state and protecting surface and groundwater from further degradation,” Stowe says.

The lawsuit had targeted drainage districts in Sac, Calhoun and Buena Vista Counties, alleging they did not properly manage farm chemical runoff. The Iowa Supreme Court ruled the Waterworks couldn’t win any damages in the suit and a federal court then dismissed the lawsuit.

Stowe says it was not easy to stop the legal fight after two-and-a-half years of work and thousands of dollars spent on the suit. “Ultimately we very carefully considered the language of the Iowa Supreme Court and the federal trial court that essentially said what we were seeking could best be sought by the Iowa Legislature,” Stowe says. “That is, policy changes affecting environment policy in this state were really matters for the Iowa legislators, not for the courts, nor Des Moines Water Works.”

Stowe says the legal fight can be considered a failure. “Now it’s time to move, to pivot to the academic process, to greater partnerships with our environmental friends, our friends in sustainable agriculture. We’ll seek out another path,” according to Stowe. “So there’s both hope — but regret frankly in that kind of process — we would far rather be speaking to you about two legal victories than two legal failures.”

Stowe says Waterworks members and supporters traveled the state and heard a lot of positive feedback for what they were trying to do. “All supportive of this idea that we need to better protect this scarce resource in our surface and groundwater. And protect safe drinking water,” Stowe says. “So there’s certainly optimism in that. The precise change of tact, change of course that we are going to go through is frankly evolving as we speak.”

The Des Moines Waterworks and Stowe were criticized for some for spending the thousands of dollars on the lawsuit. Stowe says he and the board believe the goal they were pursuing was worth the cost.

“We are in the process of looking at larger budget issues because of deteriorating water quality that will have use spending tens of millions of dollars to better remove nitrates from our surface water,” Stowe says, “so the investment of $870,000 to try and avoid that, we believe is at least a reason.”

The Waterworks has also been criticized for a lack of accountability for the spending of the money on the lawsuit. Stowe says the board is accountable to customers and they can attend the board’s meetings and make their feelings know on the issue.

The lawsuit led to a bill in the Iowa Legislature that would have dismantled the Des Moines Water Works and turned control over to cities. Key leaders in the legislature say that bill will not pass this session.