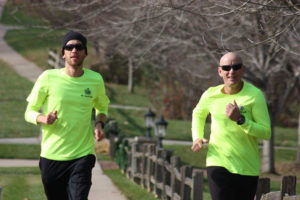 Daren Schumaker (left) of Cedar Rapids and Dennis Lee of Walford run in a recent marathon in Scott County.

They set out in 2009 to run marathons in each of Iowa’s 99 counties and on Friday, they’ll run their 99th Iowa marathon in Delaware County.

Dennis Lee of Walford says he and his running buddy Daren Schumaker of Cedar Rapids will be thrilled to cross that final finish line.

“We’re both pretty excited, a little nervous for the last one,” Lee says. “It’s one that I have to finish and I’ve actually been injured the last couple of months, so I’m a little extra-nervous but we’re both excited to be at the 99th one.” The purpose of the marathon of marathons is to raise awareness and money for heart health. Lee says he’s a much better runner than a fundraiser but their goal was to raise at least $250 in each Iowa county. The overall goal is to donate $25,000 to a mutually-agreed-upon charity.

“The American Heart Association was important to both of us because Daren had lost both of his grandparents to heart disease and I lost both my parents and my oldest brother,” Lee says. “It was an easy decision of what and who to do it for.” Over the past eight years, Lee estimates they’ll have spent $22,000 on transportation costs and entry fees. While some of the runs were the traditional marathon length of 26.2 miles, others ran 30 and 40 miles. All told, by this weekend, they’ll have run almost 2,700 miles through Iowa’s 99 counties. Lee, a telecommunications equipment salesman who turned 51 this week, says he’ll be dialing back his running ambitions after Friday’s race.

“I’m in my 50s now and I want to pull back a little bit and run and walk and stay in shape,” Lee says, laughing. “Maybe do a few races here and there but my marathons are going to be few and far between from here on out, I think.” Schumaker is 33 and is a federal probation officer. If you’d like to donate to their cause, find a link to “Team 99 Counties” on Facebook.