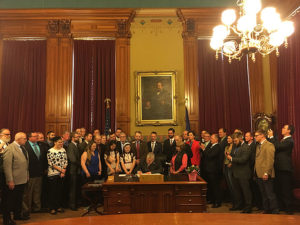 Supporters of the gun bill surround the governor as he signs it into law.

The new law’s “stand your ground” provisions will shield Iowans from lawsuits or criminal charges if they shoot to defend life or property, not just in their own homes, but anywhere they are legally permitted to be. That part of the bill takes effect July 1.

People from any state with a permit to carry a concealed weapon will be able to take it into the state capitol after July 1st, too.

“Expanding the freedoms and solidifying the constitutional rights of Iowans should always be a goal for our state whose motto is: ‘Our liberties we prize and our rights we will maintain.’ In fact, an article in yesterday’s Washington Post called this legislation, ‘Iowa’s most expansive gun bill ever.’ Of course, that’s the Washington Post, so” Branstad said, as the crowd around his desk laughed and one person hissed.

Branstad praised two key legislators — Representative Matt Windschitl of Missouri Valley and Senator Dan Dawson — before he used almost two dozen pens to affix his signature to an official copy of the bill.

“These things don’t happen by accident,” Branstad said. “They take, in this case, a long time, and they take a lot of thought and a lot of effort from many people.” 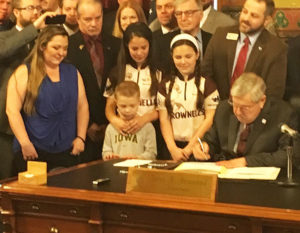 A few parts of the law take effect immediately. The names and addresses of gun permit holders had been public records, but as of today, they’re to be kept private. In addition, children under the age of 14 may now handle a pistol or handgun if they’re supervised by a parent. Natalie and Meredith Gibson of Johnston are 11 and 13 years old. They stood by the governor as he signed the bill and Branstad handed the girls two of the pens he used to sign the bill.

“You’ve been working and lobbying for this for a couple of years, right?” Branstad said, as he spoke with the girls and someone in the crowd said it had been a four-year-long lobbying effort. Branstad replied: “All right! Congratulations. And you’ve got the ‘Brownell Shoots’ (shirts) on, too. All right!”

The family left the capitol, headed to an indoor shooting range in Johnston for midday target practice.