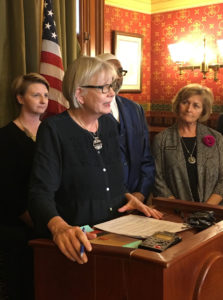 Republicans on a House subcommittee tonight set aside $3 million in state money to pay for contraceptives, exams and other reproductive health services for Medicaid patients in Iowa, but there’s no language in the bill specifying which clinics qualify. The intention, though, is to prevent any of that money from being spent at health facilities where abortions are performed.

Representative Beth Wessel-Kroeschell of Ames admits since she and other Democrats are a minority in the legislature, they do not have the votes to stop this.

“But we can let Iowans know what’s happening and I think that’s probably the most important thing we can do today,” she said tonight.

Back on February 2nd, the Republican-led Senate passed a bill to deny state tax dollars to facilities that perform elective abortions.

A key Republican said the details of the House GOP’s plan may be released sometime tomorrow. Wessel-Kroeschel said the bottom line is the state is giving up matching federal dollars for the Medicaid program, while the GOP’s budget plan reduces the Iowa Department of Public Health’s budget by 10 percent.

“This could put us at a public health risk,” she said. “It is absolutely unconscionable that you leave $3 million on the table when you are doing those kinds of cuts.”

Legislators are rushing to craft the final details of a spending plan for the state budgeting year that begins July 1. Lawmakers hope to wrap up the 2018 legislative session next week.