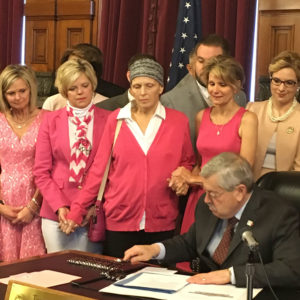 Patty Bernard watches with supporters as the Governor signs the bill.

The new law directs facilities that provide mammograms to let a woman know if she has dense breast tissue, so she can get an ultrasound in addition to a mammogram.

Advocates say tumors can be obscured in mammograms if a woman has dense breast tissue. Branstad praised Patty Bernard of West Des Moines during his official bill signing ceremony.

“Patty has advocated for breast density legislation for many years,” Branstad said. “As a result of Patty’s tireless work, I am proud to sign Senate File 250, which we are calling Patty’s Bill.”

Several of the women who surrounded Branstad’s desk for the event were moved to tears.

“We have a special pink copy of this bill,” Branstad said, getting an almost unison series of “Ahs,” from the crowd, who then applauded. “So Patty, you’re going to get this pink copy and this is the pen that I’m signing it with.”

Many of the women present, including Lieutenant Governor Kim Reynolds, were wearing pink clothing. A group who called themselves “The Iowa Army of Pink” had lobbied for the bill for the past five years.

“Each year, over 2,300 Iowans are diagnosed with breast cancer,” Branstad said. “In fact, breast cancer is the most common type of cancer diagnosed among females in Iowa.”

Branstad said letting women know they have dense breast tissue that may hide tumors from being visible on a mammogram “will save lives” because those women may detect tumors earlier.