You are here: Home / Agriculture / Farmers waiting for soil temps to warm to begin planting 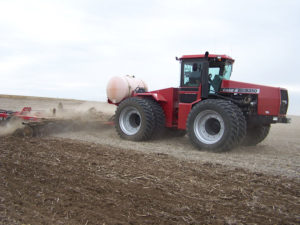 Preparing a field for planting in northwest Iowa.

Many farmers are anxious to start planting, but an Iowa State University crops specialist says farmers may want to wait at least another week for some warmer weather so the soil can warm up.

Joel DeJong works in northwest Iowa and says you need soil temperatures above 50 degrees, and while the air temperature rose a little this past weekend, temperatures then dropped off.

“We’ve had average daily temperatures significantly lower than 50 degrees the last couple of days. So, we’re starting to see that temperature drop. In almost all cases up here it is lower than 50. We use 50 as that starting point. We want it to be 50 degrees and warmer, to really get going, because it takes 50 degrees temperature for that seed to really do much of anything,” DeJong says.

DeJong says there were some farmers who had planted their corn by this time last year, and for some it worked out well, while others encountered some problems. “Sometimes the old timers tell me that we need a good warm rain. We really haven’t had a good warm rain to warm things up either. So, that’s part of the mix. The profile still remains fairly cool. It’s not awful though. We see lots of cases with today’s hybrids and today’s seed treatments, we can tolerate some cooler temperatures than we have historically,” DeJong says.

He says there was a lot of corn planted on the 11th and 12th of April last year, and most of that, particularly the western half of the area did pretty well. He says the research indicates April 15th through May 8th is a planting range where they’ll get from 98 to 100 percent of the typical yield if planting in good conditions.

“We can extend that range from 95 to 100 percent range. You never know what each year is going to bring? Some we can expand that range, others we need to shrink that range a little. But that’s kind of the general,” DeJong says. ” We have a nice window of opportunity. Most producers only take about five…six…seven days to plant. We have some larger producers that take more. So, we’re really early, and more than likely in this part of the state, we will get that window of opportunity in that ideal time period again.”

The Iowa State University Crops Specialist says sometimes if farmers till their ground during wet conditions, it could lead to soil compacting, and the bottom of the disk zone getting smeared. “We need to be a little cautious with that. If its too wet and we smear that gets hard and dries out and then we have

roots having trouble to penetrating that. So, we need to watch that zone a little bit too,” DeJong says. The weekly crop report from the U.S.D.A. released Monday show no planting yet in the state.