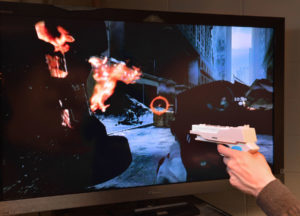 A new study from Iowa State University finds that media violence affects aggressive behaviors across a variety of cultures.

The study’s sample includes people from seven different countries. Participants named three of their most frequently watched or played TV shows, movies or video games, and then rated how often they used each title. The researchers then evaluated the violence level of the media, and contrasted that data with survey answers that looked at behaviors like physical aggression or arguing.

Iowa State psychologist Craig Anderson says the findings show that exposure to violent media is associated with aggressive behavior. “There’s some variation of course, as will be true in any study, but it looked to be pretty much the same affect in all of these countries,” Anderson said.

Researchers looked at the media habits of more than 2,100 people. This study is the first to examine the effects of media violence on such a wide scale, according to Anderson.

“Although there have been studies of media violence finding similar affects in multiple countries, there haven’t been any large scale studies that use the same measures of media violence exposure and the same measures of aggressive behavior in all the different counties all at the same time,” Anderson said. Criticism of the study takes issue with the method researchers used to rate violence and aggression levels. The study’s sample includes people from Australia, China, Croatia, Germany, Japan, Romania, and the U.S.