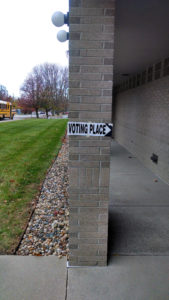 Republicans in the legislature have sent Governor Branstad a bill that shortens the voting period in Iowa and sets up new verification procedures for voters.

“It’s a common sense solution supported by the vast majority of Iowans,” Senator Roby Smith of Davenport, a Republican, said during an interview today.

The bill shortens the “early” voting window in Iowa from 40 days down to 29. In addition, precinct workers will be required to check a prospective voter’s signature on a driver’s license or voter ID card to confirm the person is eligible to vote. Smith said the bill’s safeguards will prevent voter fraud.

“Iowans will find out that we are going to have elections that they know are fair,” Smith said. “They know that every vote will be counted and the people that should vote can vote.”

Republicans are setting aside nearly $700,000 to implement the new law — partly to provide new voter I-D cards to the estimated 85,000 eligible Iowa voters who do not have a driver’s license.

The final version of the bill cleared the Republican-led Senate today on a 28-21 vote. The House took a final vote on the proposal on Monday, with all 56 “yes” votes coming from House Republicans. Democrats opposed the measure. Senator Tony Bisignano of Des Moines called it a “voter suppression bill” during remarks today during Senate debate.

“By all the gymnastics that you’ve done to make it harder for people to vote,” Bisignano said.

Bisignano and other Democrats say elderly, disabled and minority Iowans will be confused and discouraged from voting by the election law changes.

Governor Branstad is expected to sign the bill into law. He’d like to go even farther and close the polls on Election Day an hour earlier. Branstad says Iowa’s 14-hour voting period on Election Day is the longest of any state and results would be known sooner if the polls closed at 8 p.m. The polls for General Elections in Iowa open at 7 a.m. and close at 9 p.m. and that will not be changed by this bill.