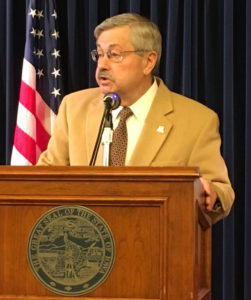 Tests that Iowa kindergarten through third grade students took last spring found nearly 50,000 of them were below average readers, but Republican legislators are scrapping a program Governor Branstad touted five years ago to address the problem.

“One of them was done in my hometown of Fort Dodge, within Butler School,” Fraayenbrink says. “I know I talked to the people there. They had 120 students that were targeted. They actually enrolled 90 and 60 of them finished the course.”

“We still cannot forget the ones that can’t read. I understand that, but we didn’t have a lot of success in that trial,” Kraayenbrink says.

Five years ago, Branstad proposed that third graders who could not read at grade level repeat third grade rather than advance to fourth grade, but legislators did not include that mandate in the 2013 education reform package. The summer school idea for struggling readers was included, however.

About a quarter of the third graders in Iowa schools today are not yet reading at the third-grade level.