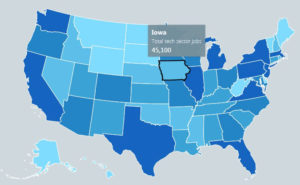 Steven Ostrowski, spokesman for the Computing Technology Industry Association or CompTIA, says Iowa’s tech industry workforce fell by more than 800 jobs or almost two-percent during 2016, putting the state near the middle of the national pack.

“Iowa ranks 32nd. They have just over 45,000 tech industry workers across the state,” Ostrowski says. “Their average wage is $77,600. That’s 38th across the United States.” That tech salary figure is about 75-percent higher than the average private sector worker in Iowa, who earns about $44,400.

“A third category we’ve ranked the states in this year is innovation,” Ostrowski says. That’s a combination of patents issued to companies within the state, the number of new tech startups and the number of new tech businesses that have been established over the course of the calendar year, and in that ranking, Iowa comes in 37th.”

CompTIA’s 18th annual CyberStates report finds more than 4,200 tech businesses located in Iowa. Among the leading tech occupations in the state are: application software developers (7,380), computer systems analysts (5,300) and computer user support specialists (3,870). He notes, virtually every industry in the state is utilizing technology and those numbers are growing.

“It’s not necessarily just working for a technology company,” Ostrowski says. “In Iowa, there are over 62,000 workers who have technology jobs working in other industries. That could be agriculture. That could be finance, education, government, health care. It’s a pretty healthy workforce with technology as part of their credentials.”

Iowa ranks 14th in the nation in terms of gender diversity in the tech workforce. The study says 77 percent of Iowa’s tech workers are male, 23 percent female. That’s slightly better than the national average of 78 percent male and 22 percent female.