You are here: Home / Agriculture / Biofuels backers still trying to get a read on President Trump 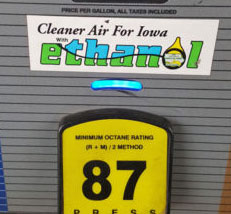 A biofuels industry leader says the jury is still out on the Trump administration’s attitude toward biofuels.

Doug Durante, executive director of the Clean Fuels Development Coalition, says the industry is still trying to figure out how to deal with the new administration.

One thing is for sure, Durante says the ethanol industry’s argument that it reduces greenhouse gas emissions and helps clean the air doesn’t resonate with the Trump team.

“This is not a pro-renewable energy administration,” Durante says. “They make no bones about it, this isn’t a secret.” According to Durante, the Trump administration is “very skeptical about climate change,” so reducing carbon emissions isn’t a priority. But, Durante is hopeful that Trump’s EPA will be easier to work with on regulatory issues.

“That the EPA will be more inclined, under this administration, to look at things differently…because it hasn’t been good for us in the past,” Durante says. “If they reinterpret some of these things and accept new data and listen to what we’re telling them, that part I believe is going to be very good. So from that standpoint, I’m encouraged.” Last month, new EPA Administrator Scott Pruitt set up a task force to review existing EPA regulations and invited public comments.

Brian Jennings, Executive Vice President of the American Coalition for Ethanol, says the top priority for his group is having the EPA revise emissions standards to allow E15 and higher ethanol blends to be sold year round.

“Today, in most parts of the country, retailers are now allowed to sell E-15 in the summer months. That’s because EPA has refused to update a regulation regarding evaporative emissions for fuel,” Jennings says. An update of that regulation, Jennings says, would increase demand for more ethanol production and higher ethanol blends, which could help increase the price of corn.

“We all know we’re sitting on surplus stocks of corn today and low corn prices. So at the end of the day, this is about increasing demand for corn and providing a valuable market for farmers,” Jennings says. The deadline to submit comments to the EPA on its regulatory review is May 15th. Iowa is the nation’s leading producer of both corn-based ethanol and biodiesel.