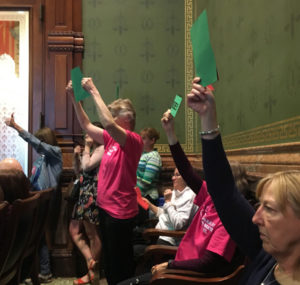 Some who attended a legislative hearing held up green paper to show their support for speakers.

The granddaughter of a man who was instrumental in promoting the use of hybrid corn is urging GOP lawmakers not to close an ag-related research center at Iowa State University.

Liz Garst, who manages her family’s 3500 acre farm in the Coon Rapids area. said the work of the Leopold Center for Sustainable Agriculture is not done.

“Thanks to the help of the Leopold Center, we have started doing more and more with cover crops,” Garst said. “…There is a huge amount of research that still needs to be done to make this technology viable, which will help protect our soil, which is Iowa’s most important asset.”

Garst was among more than three dozen people who testified today at a hearing in the state capitol that gave Iowans a chance to weigh in on GOP budget proposals. Several spoke against Republican legislators’ plans to cut state support of the ISU research center. Mills County Supervisor Mark Peterson farms about 500 near Stanton and he’s board president of Practical Farmers of Iowa.

“As a conservative Republican, I am disappointed with what I hear happening,” Peterson said. “…The Leopold Center was founded in tough ag economic times. Through their research and funding of everything from waterways to wineries, rural Iowa has improved both economically and environmentally. We are in tough times again. The work of the Leopold Center is nowhere near done.”

“Don’t let those extreme individuals lead you around by the nose,” Davison-Rippey said. “You may think that passing this language may quiet them, but make no mistake. They are not done. You pass this language and they will be right back with more demands.”

The other major topic raised during today’s hearing was the legislature’s proposed cut to victim services. Mary Ingham, executive director of Crisis Intervention Service in Mason City which serves 14 counties in north central and north east Iowa, drove to Des Moines to testify.

“We acknowledge this is a tough budget year for our state, but singling out programs supporting victims of violence for a disproportionate cut is frightening,” Ingham said. “A 25 percent reduction in state funds will have immediate, harmful consequences.”

Each speaker was limited to three minutes. A large crowd gathered around a big-screen TV in the statehouse rotunda and cheered as speakers made their points. People seated inside the hearing room waved pieces of green construction paper to signal their support for what was being said.