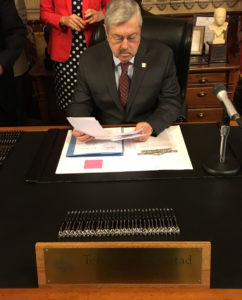 Lawmakers are aiming to finish the work of the 2017 Iowa legislative session this week, but it will require a flurry of votes in the House and Senate.

A series of bills outlining more than $7.2 billion in spending for the next state budgeting year have been drafted, but none have reached Governor Terry Branstad’s desk yet.

Lower-than-expected state tax revenue already prompted a round of cuts to the current year’s state budget. An updated and even more depressed report on revenue in March forced Branstad to recalculate his plan for the next state budget. Republican lawmakers have decided to go even lower than Branstad, by about $38 million.

“I think the legislature has been working diligently and a number of significant improvements in our public policy are being made,” Branstad said.

Policy-related bills that are already law have dramatically changed Iowa’s collective bargaining law and the system for compensating injured workers. The GOP has control of the legislature’s debate agenda, since Republicans outnumber Democrats in both the House and Senate. Senator Joe Bolkcom, a Democrat from Iowa City, blasts the GOP spending plan for closing some state parks and likely causing tuition hikes at the state universities and community colleges.

“As this Republican budget sees the light of day, it cuts vital services to all Iowans,” Bolkcom said during a speech on the Senate floor last Thursday.

Bolkcom said the problem is all the “giveaways” promised to businesses in the form of tax credits — not just reducing taxes, but in some cases, prompting the State of Iowa to write checks to businesses that get more credits than they owe in taxes.

“The 99 percent, they’re paying for all these giveaways,” Bolkcom said, “and here we are, balancing the budget on their backs.”

A bill still pending in the state senate would let doctors prescribe marijuana as treatment for a number of chronic and debilitating conditions, but Republican House Speaker Linda Upmeyer of Clear Lake said the bill is “pretty broad” and House members would prefer something “more limited.”

Upmeyer said, at a minimum, legislators will at least extend the current state law that decriminalized possession of cannabis oil as treatment for chronic epilepsy. That law is set to expire July 1.