You are here: Home / Sports / Phillips remembered as a pioneer

NASCAR took the Easter weekend off so let’s talk about Missouri’s greatest racer.

It’s always dangerous to crown someone as “the greatest who ever…,” especially someone who is not nationally-known.  But when nationally-famous people in the business say a person back home was the best there ever was, the credentials start to look pretty solid. Such is the case with Larry Phillips, “The roughest, toughest, meanest, craziest, and grouchiest son of a gun who ever climbed into a race car.”

Former NASCAR Cup series crew chief James Ince also remembered Larry Phillips “as tough as they come (some would say dirty), smart and does everything at 100%.”

Fan voting has started for the NASCAR Hall of Fame induction class of 2018. Larry Phillips is on the list. Again.   Five people from the list of twenty finalists will be chosen May 24th by a Hall of Fame voting panel.

Fans can vote as many as FIFTY times a day for as many as five drivers.  The final choice will be made by a 54-member voting panel.  The top five people favored by fans will be considered the choice of an equivalent 55th panelist. The panel will meet on May 24th and the five new members of the Hall will be announced during the Memorial Day events at Charlotte Motor Speedway. The most ardent supporters of Larry Phillips probably would prefer voters cast fifty votes each day for Phillips and forget about voting for another four.  The vote for Phillips thus has a bigger impact.

It’s been sixteen years since Phillips drove the last race of a forty-year career, long enough for a new generation of fans to be unfamiliar with the name.  They might recognize the names of Ken Schrader, Rusty and Kenny Wallace, Mark Martin, and Jamie McMurray—all of whom cut their teeth on Missouri tracks.  But Larry Phillips? 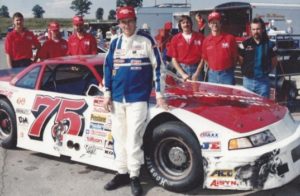 Larry Philips taught those guys a lot about being racing drivers.  Two of them, Rusty Wallace and Mark Martin, are Hall of Famers now.  And they think Larry Phillips should be with them.

Phillips was from Springfield and nobody knows how many races he won.  Maybe as many as two-thousand says Ince.  He drove only one race in NASCAR’s top series, starting 24th and finishing 13th in the 1976 California 500.  Martin thinks he could have done well at that level; Ince agrees but told RacinToday.com’s Jim Pedley that Phillips wouldn’t put up with the Cup Series’ B.S.

He started racing about 1960 and ran hundreds of races, mostly at short tracks in Missouri, Arkansas, Oklahoma, and Kansas.  Even he didn’t know how many races he ran or won.  He told the Springfield Leader & Press in 1982, “I’ll race anytime, anywhere.”

In a 1975 race at Fort Smith, Arkansas, he rear-ended another car and both cars caught fire, leaving him with burns on seventy-percent of his body.  Doctors didn’t think he’d race for two years, if ever.  He was winning again a year later.

Phillips said a combination of things made him the winner he was, telling the newspaper, “Phillips the driver and Phillips the car builder both play important parts. Anybody can drive a car like I have and do well. But being able to adjust the racer to the track conditions whether it be tires, weight, adjustment of the chassis, whatever, that is where Phillips the builder is a big factor.”

Phillips dominated what is now the Whelen All-American Series, racing at NASCAR-sanctioned short-tracks in cars he built and maintained, often against drivers in other cars he had built.  He’s the only person to win the All-American Series national championship five times.  He won five regional championships and thirteen track titles (six at Bolivar Speedway, five at Lebanon I-44 Speedway, and two more at Kansas City’s Lakeside Speedway).

And here’s something that might raise an eyebrow or two:  He did not win his first national championship until 1989 when he was 47.  He became the first driver to win back-to-back championships in 1991-92 and duplicated that performance in 1995-96.

One of his local championships was at Lebanon in ’94.  He was interviewed after winning the title: https://www.youtube.com/watch?v=tE8mTlxRnfE

Right at the beginning of that clip, you might notice Phillips drop a cigarette.  He had a lighter in his car so he could smoke during caution laps.

In 1992, the fifty-year old Phillips won thirty-two of forty races, beating 22-year old Greg Biffle for the national title.   In his thirteen seasons in the series, Phillips won 226 of the 308 feature races he ran.  He finished in the top five in thirty-seven races he didn’t win.  In thirteen years competing in that series, he was outside the top ten only thirty-three times. 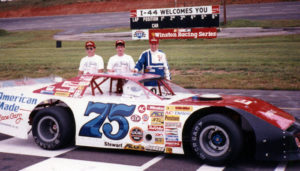 Those who knew him well say he cared about racing and winning, plain and simple.  Money?  Trophies?  Fame?  Phillips looked at his trophies as clutter.  He told Ince he hauled them off to a dump one day.  It’s not known how many trophies there were but Ince remembered they filled half a forty-foot trailer “floor to ceiling.”  Ince says Phillips was interested in checks, not trophies.

Mark Martin was just a kid from Batesville, Arkansas when he went to work in Phillips’ shop in Springfield.   On weekends they would race each other. 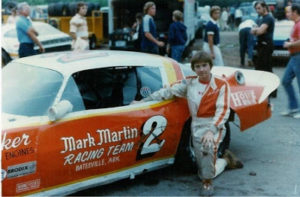 “Anybody who raced against him will remember him,” Martin (right) told Pedley. “He was unique. He was fast, won lots of races and beat a lot of people with slower cars…Larry would try every trick in the books.”  And Rusty Wallace called him “the best driver I’ve ever seen.”   He was first nominated to the NASCAR Hall of Fame in 2014.  But the guys who ran in the big-time are the ones who get most of the attention at voting time.

Jamie McMurray’s first year running late models was 1997.  He told a Springfield News-Leader reporter a couple of years ago, “I had watched him for those years that I ran my modified and he won every single night, it seemed like.” 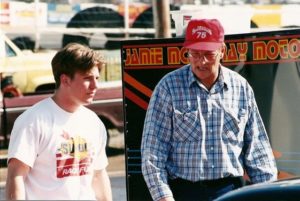 McMurray won the track championship at Lebanon in 1997.  Larry Phillips was second. Just five years later he was running in NASCAR’s top series where he won his second time out.  In 2010, he won the Daytona 500.  But by then, Larry Phillips was gone.

Phillips was diagnosed with lung cancer in May, 2000 and began chemotherapy a month later—and still went out weekend after weekend and won races.  He ran his last race in April, 2001 in Lebanon and led for a good part of it.  But his cancer treatments had sapped his endurance and he finished second.  Finishing second was not what Larry Phillips was about.  He took the car, went home, and never raced again.  He died September 21, 2004.

He has some stiff competition in the voting from a lot of nationally-recognized names.  But a lot of folks who saw him race or raced against him think he could have whipped ‘em all at Lebanon. Or Bolivar. Or just about anywhere.

If you have the time and inclination to vote fifty times a day for Missouri’s greatest racer, you can do it at: http://www.nascarhall.com/inductees/fan-vote.