You are here: Home / News / Texting and driving a ‘primary’ offense under new state law (AUDIO) 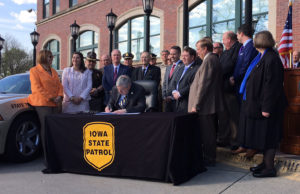 Iowa is no longer one of the most lenient states when it comes to people caught texting and driving.

Lieutenant Governor Kim Reynolds kicked off a bill-signing event outside the Iowa Department of Public Safety headquarters this morning.

“The bill elevates the act of sending a message while driving to a primary traffic offense,” Reynolds said, “and that means that if you’re engaging in sending a text and email or video message of any kind, you can be pulled over and issued a citation.”

The fine for a texting-while-driving ticket will be $30.

“I’m confident that this bill will help send the message to drivers in our state: eyes on the road while driving,'” Reynolds said.

Governor Branstad was joined at the event by legislators and public safety advocates who lobbied for two bills, both of which Branstad signed into law today. One sets up a new monitoring program for repeat drunken drivers and toughens the penalty to a felony for people caught using their smart phones behind the wheel and killing others on the road. The other bill will let police pull a vehicle over if they suspect the driver is using their smart phone for anything other than navigation or to make a phone call.

“We were one of the last states to make it a primary offense to text and drive,” Branstad said. “I think there’s only four states that hadn’t done that, so this is certainly a good step in the right direction. I think it’s going to make a difference.”

The governor, however, had recommended a “Hands Free” law that would have completely barred the use of a smart phone while driving.

“We are pleased that we saw this progress this year and, obviously, we’ll see how this works,”Branstad said. “…But a number of states have gone beyong this. Going further with the ‘hands free’ law is something that should be considered in the future.”

Iowa Department of Public Safety director Roxann Ryan said with today’s bill signing, Iowa has gone from having one of the weakest to one of the toughest laws on texting while driving.

“We cover anything that you’re doing on the internet, anything on your phone, anything on any another electronic device,” Ryan said. “We truly are making a difference and I think when people begin to realize how distracted they are when they’re driving and they’re using electronic devices, hands free is going to be much easier argument to make in the future.”

“Lane departures” were cited in 68 percent of recent traffic fatalities. Ryan said drivers who are distracted with their smart phone tend to drift out of their lane and drive too fast. Branstad says distracted driving, drunk driving and excessive speed are all contributing to the recent increase in traffic fatalities in Iowa.