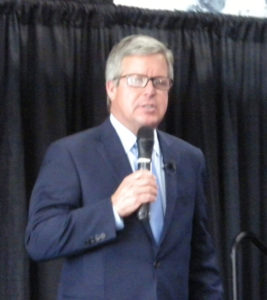 The NCAA men’s basketball tournament is returning to Wells Fargo Arena in Des Moines in 2019.

The president of the Greater Des Moines Convention and Visitors Bureau, Greg Edwards, got emotional a couple of times Tuesday as he talked with reporters following the announcement by the NCAA.

Edwards says winning the bid to host the tourney is as big a deal for the organizing committee as it is for the teams who play their way in.

“Every day we have successes, but it may be a meeting for 75 people or a smaller event, and this has always been the granddaddy of them all — hosting the NCAA basketball tournament. I prepared myself and said ‘I’m not going to get emotional,’ but I am just so happy,” Edwards says. Des Moines hosted the first two rounds in 2016, but Edwards says they knew they weren’t guaranteed to get another bid.

“So when we sat down and began strategizing with this round, we knew the NCAA was very pleased with some of the things we did and we had several follow up meetings with them since 2016. But, we continue to really create that bond between ourselves and the NCAA staff, which I think is very important. and we do have a very strong bond with a lot of the basketball teammembers from the NCAA,” Edwards explains. 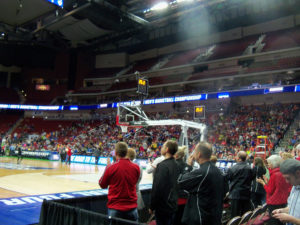 Fans watch teams practice prior to the NCAA Tournament in 2016.

Edwards says the tickets sold out quickly for the rounds in Des Moines, and he says the turnout for the free day to watch practice made an impression. “That was a huge thing for the NCAA. They said they’d never seen any practice rounds so full,” according to Edwards. “They sold more merchandise out of the Wells Fargo Arena that day than they’d ever sold in any other arena. So, that was pretty cool.”

He says the announcement now sets things into motion for 2019 “We’ll start really immediately hosting our local organizing committee meetings talking about everything from logistics to airport to transportation and on and on,”Edwards says. “We’ll have everything double crossed off by the time 2019 rolls around.”

Arena Manager Chris Connolly was also excited about the winning bid. “Really a great feeling, just proud. You know, we felt like we finally broke through in 2016,” Connolly says, “we were a first-time host, we felt like by all accounts we did a great job as a host and we felt like we had a great chance to get it back. And then to be rewarded with it coming back as soon as 2019 — just a great feeling.” The arena has hosted a lot of events, but Connolly says hosting in 2016 was something really new and they learned from it.

“I think the biggest thing is truly having over 17-thousand people in the building for the event — that’s one or our largest crowds we’ve ever had in Wells Fargo Arena. That first day of the tournament you are talking 10 to 11 hours where we have part-time employees in servicing the guests. It’s a long, long day,” Connolly says. “So I feel like we’ve learned a lot of things — how service the guest, how to maybe do a better job in the concessions and food and beverage and the hospitality piece. I think until you’ve been through it, it’s really hard to understand exactly what you are dealing with.” Des Moines’ first tourney included big names teams like Kansas, Kentucky and Indiana, which put even more of a spotlight on the venue.

“It was unreal. I mean it would be hard to imagine you’d get that kind of a matchup in the first and second round. You have Kentucky and Indiana who played each other in the second round who don’t play annually any more, so we had tons of folks coming from Kentucky and Indiana for the second-round game on a Saturday. So, I think for sure Des Moines had a lot more pressure than some of the other places in the first and second round,” Connolly says. Connolly says the timing of the tournament works well in the sports schedule.

He says the NCAA Tournament is after the boys and girls state tournaments, and the Wild hockey team and Energy basketball team understand that it is a good thing for Des Moines and don’t mind having the time blocked out. The Greater Des Moines Convention and Visitors Bureau estimates the 2016 tournament had a five million dollar impact on the area.