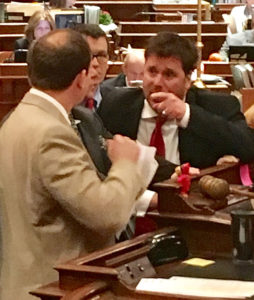 New abortion restrictions will soon be law in Iowa.

The Iowa Senate has given final legislative approval to a bill banning nearly all abortions after the 20th week of pregnancy. Governor Branstad has signaled he’ll approve it.

Republican Senator Mark Costello of Imogene made a final pitch before senators voted on the measure.

“I’ve got five children and it was about five months when I could put my hand on my wife’s tummy and feel the baby kicking and she could feel the baby moving around and that life there as being very evident,” Costello said early this evening.

The bill also requires women seeking an abortion to wait three days before the procedure is performed. Senator Mark Chelgren, a Republican from Ottumwa, called that the “time share clause” in the bill.

“No one would buy a time share if they were able to go home and talk to their friends, talk to the neighbors, pray about it, sleep on it and talk to people they trusted,” Chelgren said. “Anyone who wants to get an abortion and has made that decision can do so under this bill…All they have to do is wait 72 hours to make sure that that decision was right because it’s an irreversible decision.”

Senator Pam Jochum, a Democrat from Dubuque, said the three-day waiting period is an “insult” to women.

“You think we just walk in there on an impulse and try to end a pregnancy? You are dead wrong on that. Dead wrong,” Jochum said. “…Some think that ‘big brother government’ can make all those decisions for us…I trust Iowa women.”

Senator Rick Bertrand, a Republican from Sioux City, voted for the bill, but expressed outrage that his fellow Republicans were not pursuing an outright ban on nearly all abortions.

Senator Joe Bolkcom, a Democrat from Iowa City, said the bill is a “concerning” development in the legislature’s “ping pong” debate over abortion.

“It’s time for politicians to stop interfering in the health care decisions of women and her trusted advisors and her family,” Bolkcom said. “Enough is enough.”

The bill cleared the Senate on a 30-20 vote, getting the support of all 29 Republicans and the independent senator. All of the no votes came from Democrats.

Republican legislators also intend to “defund” Planned Parenthood. In February, the Republican-led senate voted to forbid Iowa Medicaid patients from getting exams or contraceptives at facilities or from doctors who perform abortion. House Republicans are tacking a similar proposal onto a budget bill.