You are here: Home / News / Possible tornadoes, strong storms in store for Iowa 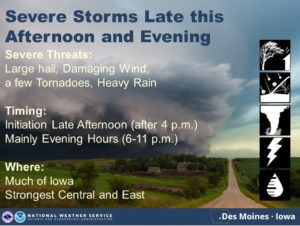 The entire state is under the threat for severe thunderstorms. National Weather Service Meteorologist Cory Martin says the system is expected to enter western Iowa late this afternoon and push east through the evening and into the early overnight hours.”All modes of severe weather are possible including large hail, strong wind gusts, and also the possibility of a few tornadoes,” Martin said.

The biggest tornado threat appears to be over west-central and southwest Iowa, according to Martin. Heavy rain is also likely. “It remains to be seen if it’s going to lead to any flash flooding concerns. It looks like the storms will be moving at a decent clip. That would alleviate any threat for flash flooding, but it’s something that we’ll monitor,” Martin said.

Dry and cooler conditions are expected for the remainder of the work week and into the weekend.