You are here: Home / News / $150,000 budget approved for Branstad-to-Reynolds transition 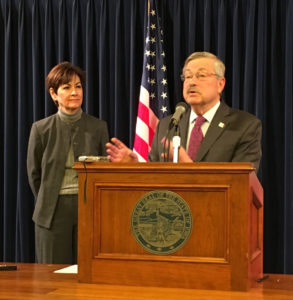 Governor Terry Branstad and Lieutenant Governor Kim Reynolds have asked legislators to set aside $150,000 to cover transition expenses when Reynolds takes over as governor after Branstad resigns to become U.S. ambassador to China.

During senate debate this afternoon, Senator Tod Bowman, a Democrat from Maquoketa, said that “seems excessive.”

“While the state’s in the middle of budget mess, it’s extravagant and unnecessary to move the lieutenant governor from one room of the capitol to the other,” Bowman said. “$150,000 may not seem like a lot to you, but the median income for a family in the state of Iowa is $55,000. That’s almost taking three families’ total wealth for the year.”

But Senator Charles Schneider, a Republican from West Des Moines, suggested much of that $150,000 may cover exit packages for departing Branstad staff.

“For example, the governor’s office will have to cash out vacation time and sick time and other time off and there are other expenses that go along with it, too,” Schneider said.

The Branstad/Reynolds office budget is about $2.2 million, with about two dozen authorized full-time staffing positions.

“Anytime there’s a transition, there will be staff turnover,” Reynolds told reporters this morning after a bill signing in Governor Branstad’s formal capitol office. “They’ll be looking at other opportunities and so I want the flexibility to address that.”

Reynolds didn’t suggest there will be “wholesale” staff changes in her office, however.

“Whenever there’s a transition, you have some staff turn-over, you have technology, there’s some additional potential travel, supplies,” she said.

A $150,000 transition budget would be six times larger than the $25,000 budget Republican legislators established in 1998 for Democratic Governor Tom Vilsack’s transition. Eight years later, Vilsack and legislators provided a $170,000 budget for the transition when Democrat Chet Culver took over as governor in 2007.

Democrats in the Senate like Matt McCoy of Des Moines tried to erase the $150,000 for the Branstad-to-Reynolds transition from a budget bill.

“I think this is unnecessary,” McCoy said. “I think it’s wasteful.”

Senate Republicans like Schneider prevailed and the money is included in a big budget bill that cleared the senate late this afternoon.

“It does not seem like an unreasonable request to us in light of previous circumstances and prior precedent,” Schneider said.

Republican legislators have most of their work done on the entire state budget for next year. There are just a few decisions left before lawmakers can end the 2017 legislative session. That may happen sometime Friday or Saturday.