You are here: Home / Agriculture / Donations to ISU’s Leopold Center may be in limbo after closure 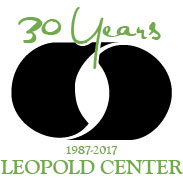 Republicans in the legislature have approved two bills that doom the Leopold Center for Sustainable Agriculture at Iowa State University.

However, closing the research center seems to endanger donations to ISU that were specifically for the center. Mark Rasmussen, the center’s director, has begun notifying researchers who got grants from the center.

“The way the bill is written, we have to start winding it down almost immediately,” he said during an interview with WNAX Radio. “As you can imagine with anything like this, we let out two- to three-year grants, so we’ve always got projects in the pipeline that are either just starting or are in the middle of their lifespan.”

Democrats in the legislature have been pleading with Republicans to abandon their plan to close the Leopold Center.

“This center at Iowa State is more than what a lot of you may realize,” Dotzler said. “…It’s unfortunate that this became some kind of a political game, I guess in a way, to shuffle the money away from something that does so much for sustainable agriculture.”

Over the past three decades, the center has funded more than 600 research projects. Republicans included language in a budget bill that calls for closing the center. A different bill re-directs nearly $400,000 state tax dollars that would have been spent at the Leopold Center. Another ISU research center that’s specifically focused on manure and fertilizer management would get the money. Republican Senator Tom Shipley, a farmer from Nodaway, defended the move during remarks on the Senate floor.

“We believe the Nutrient Research Center can do a lot of those things, if those projects have merit, not to say that the others haven’t — but,” Shipley said. “I have a lot of faith in the people at Iowa State University. I’d better have because I’ve got a piece of paper that says they taught me a few things. If they see other opportunities or ways to make these things work, I have every confidence that they’ll be able to do that.”

According to language in a budget bill, Republicans in the legislature want the Leopold Center to “cancel any existing grant or project that is not in the process of being completed.”

It’s unclear how Governor Terry Branstad views this move. During his weekly news conference on Monday, Branstad did not respond directly to a question about closing the Leopold Center.