You are here: Home / News / Dozens of cats rescued from Sioux City home 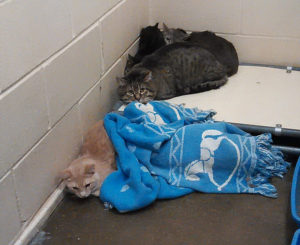 Some of the cats rescued from a Sioux City home.

Sioux City animal control found more than 40 cats in a home Friday after getting a tip.

Megan Lalk of animal control says they found the animals in horrible conditions with an overwhelming smell. “I was the one that originally went out there, and even just walking up to the house, the smell was horrific,” Lalk says.

She says the house was posted with a 24-hour notice and once that was up, they went in and started removing the cats. Lalk says two people were living in the home that was covered in waste.

“There were a lot of the cats that were sick. And when they are in that environment and you take them out into the fresh air — their upper respiratory goes crazy — just because they are used to breathing in the ammonia and all the stuff that’s in a house in that condition,” Lalk says. She says when they originally went in they found 41 cats, but found some more when they checked again. Some of the cats died after being rescued and others are being treated for a variety of health issues.

She says they try to keep the sick ones separated from the rest of the animals, because they are holding them now until the case makes it way through the legal process. She says they left traps in the house to try and catch at least five more cats. Investigators are still working on the case and say charges are possible against the two people living in the home.