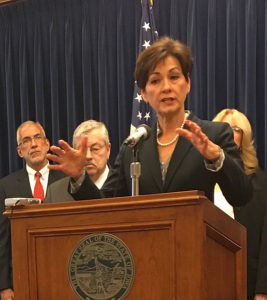 Governor Terry Branstad and his fellow Republicans in the legislature are pushing back against Democrats who’ve complained about the $150,000 “transition budget” for Lieutenant Governor Kim Reynolds.

Branstad today suggested the criticism is sexist. “They would criticize a Republican woman,” Branstad said during his weekly news conference. “But they would give $170,000 to a Democrat male.”

Branstad is referring to the transition budget when Democrat Chet Culver took over from Democrat Tom Vilsack.

“The same Democrats….gave $170,000 for Culver’s transtion and our budget for the governor’s office is less than it was when Culver left office. Those liberal Democrats have nothing to talk about here,” Branstad said, laughing as his voice rose. “I tell you. I can’t believe it.”

Branstad and Reynolds say much of that $150,000 will be used to pay staff who leave the governor’s office their unused sick leave and vacation time.

“Especially with the system that we have, when you have long-time employees that haven’t used their vacations, there’s a huge payout if they leave,” Branstad said. “And so we expect there will be some of those kind of changes and, as a result, that the reason why we’ve always provided money for transition.”

In 1998, Branstad approved spending $25,000 for the transition to his successor. At the time of that decision, it was unclear who the next governor might be. That was again the case eight years later. The 2006 legislature set aside $170,000 for the transition after Governor Tom Vilsack left office. At the time, three Democrats and then-Congressman Jim Nussle, a Republican, were running to be the next governor.

This transition will be different. It’ll happen in the middle of Governor Branstad’s term and his successor will be Lieutenant Governor Kim Reynolds.

“I just don’t like this partisanship,” Branstad said this morning. “…This is a one-time, $150,000 appropriation for transition.”

Audio of the governor’s weekly news conference is here.

It’s unclear when that transition may happen. Branstad told reporters today he’ll be in Washington this week for meetings about his nomination to be ambassador to China. The governor has 30 days to sign or veto all the bills passed by the legislature and Branstad indicated he’s likely to remain governor during most if not all of the month.