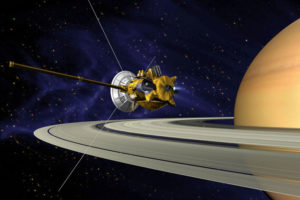 A spacecraft that was built in part at the University of Iowa is maneuvering to make the first of its final orbits around Saturn early tomorrow morning.

U-I research scientist Bill Kurth says Cassini is now positioned to zoom very close to the ringed planet’s atmosphere, skimming the cloudtops of an unexplored region which should produce a wealth of new data.

“For the first time, Cassini will take this daring plunge through the gap between Saturn and its rings at 76,000 miles per hour,” Kurth says. The robotic spacecraft was launched in 1997 and was originally designed to spend four years orbiting Saturn. It’s now approaching 14 years in orbit.

Kurth says they’ve angled the craft to scoot between Saturn’s rings and the atmosphere for a total of 22 orbits, a course change which should only keep it aloft another four-and-a-half months.

“And then finally on September 15th, the orbit will degrade in such a way that the spacecraft will fall into Saturn’s atmosphere and that will be the end of our mission,” Kurth says. It’s a bittersweet finish for the $1.4 billion spacecraft, he says, as the repeatedly-extended experiment is — at last — reaching its conclusion with this new trajectory.

“We call that Cassini’s ‘Grand Finale,'” Kurth says. “As far as I’m concerned, it’s almost like an entirely new mission because the spacecraft has never been in that portion of space around Saturn. We’ll go to places we haven’t visited in the previous 13 years in orbit.”

The Iowa-built instrument onboard Cassini studies radioactive emissions and waves in the ionized gas that surrounds the planet, called plasma. Kurth helped build the instrument by hand in Iowa City. The final orbits will bring the spacecraft into position to analyze the lightning in Saturn’s thunderstorms which can sometimes last up to nine months. It will also be able to study the planet’s magnetic field, the composition of the rings, and Saturn’s northern and southern “lights” or auroras, which are similar to those above Earth.

Kurth is also one of the lead researchers for Juno, the NASA spacecraft now orbiting Jupiter, which still has many years left in its mission.