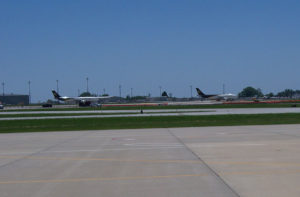 State taxpayer support of the 107 airports in Iowa will be reduced by nearly 40 percent in the next budgeting year under the plan Republican legislators crafted.

The eight airports that offer commercial passenger flights will get about $600,000 less. Representative Dennis Cohoon, a Democrat from Burlington, says the state funding helps the smaller commercial airports in Iowa that offer passenger service update their facilities.

“In my own case, in Burlington, we have flights out to Minneapolis, St. Louis, Chicago,” Cohoon says. “Without this funding and with reduced funding year after year, what’s going to happen is we’re going to lose those flights and, when that happens, the airport will close down.”

“Our airports are the first thing that people see when they enter our cities,” Smith says.

Representative Dan Huseman, a Republican from Aurelia, says the GOP had to make difficult choices because of lower-than-expected state tax revenue.

“In the past we have done better as far as the levels of funding that we have provided for the airports and I know that they do put that money to good use,” Huseman says. “…We looked at other ways that maybe we could find a little bit more money to put in there.”

But Huseman says, in the end, there just wasn’t enough money for every priority.

In addition to the state’s largest airports in Des Moines and Cedar Rapids, commercial passenger service is available at airports in Burlington, Dubuque, Fort Dodge, Iowa City, Mason City, Sioux City and Waterloo. There are also 99 other airports in Iowa which offer “general aviation” service for smaller planes. Those smaller airports got $750,000 from the state in the current budgeting year. The GOP’s budget plan for the next year is a quarter of a million dollars less for those 99 airports.