You are here: Home / News / ‘It’s been a dream,’ Branstad tells crowd at farewell reception (AUDIO) 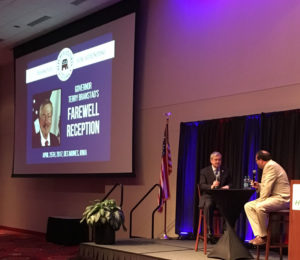 More than 400 of Terry Branstad’s supporters and staff gathered for a “farewell reception” tonight in Des Moines.

Next Tuesday, the U.S. Senate Foreign Relations Committee will hold a confirmation hearing for Branstad to discuss his new role as President Trump’s pick to be U.S. Ambassador to China.

But tonight, Branstad reminisced about his Iowa political career and status as the nation’s longest-serving governor.

“Every day that I’m in office I break the record, so I kind of love that,” Branstad said, with a smile, as the crowd laughed.

Branstad rattled off his “ingredients of success” — maxims like work hard, set goals, look for opportunities, be willing to adjust to the times and have a positive attitude.

“It’s been a dream for me to serve the people of Iowa,” Branstad said. 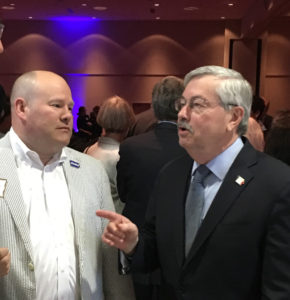 The Governor talks with a supporter at his farewell party.

Branstad also talked about growing up on a farm near Leland, Iowa, and his courtship of Chris Johnson.

“Our very first date was I think October 23, 1971 to Drake’s homecoming,” Branstad said. “…We went to a Helen Reddy concert afterwards.”

Iowa First Lady Christine Johnson Branstad got a standing ovation from the crowd. Lieutenant Governor Kim Reynolds, Branstad’s successor, got a rousing reception, too. Branstad described Reynolds as someone who shares his “rural conservative philosophy.”

“Every assignment I’ve ever given her, she’s exceeded expectations,” Branstad said, to cheers. “…She’s that kind of hard-working, conscientious person that wants to know the details…No doubt in my mind she’s going to be a great governor and I’m looking forward to the great things that she’ll accomplish.”

“I know sometimes Iowa men have a hard time saying, ‘love,’ but this full room here tonight…we love you for who you are,” Kaufmann said.

AUDIO of Branstad and Kaufmann on stage, 33:00

Branstad is heading to Washington, D.C. tomorrow to meet privately with members of the Senate Foreign Relations Committee. Branstad’s public confirmation hearing before the committee will start at 9 a.m. Iowa time next Tuesday.