You are here: Home / News / When pondering tax reform, Reynolds says: ‘put everything on the table’ 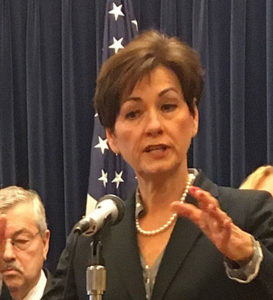 Water quality initiatives, “comprehensive” tax reform and an examination of government pension policies — those are some of the priorities Iowa’s next governor will pursue during the 2018 legislative session.

“We got a lot of great things done this year that will continue to make Iowa competitive and help us grow the economy the next step is to take a look at our tax structure,” Lieutenant Governor Kim Reynolds told reporters Monday.

Reynolds is likely to take over as governor late this spring or early in the summer when Terry Branstad is confirmed as U.S. Ambassador to China. Reynolds, though, isn’t ready to reveal her preferred tax plan yet.

Iowa’s current governor asked legislators this past January to provide more money for water quality projects, but Republicans in the House and Senate could not agree on financing or the process for awarding grants. Reynolds indicated she’ll continue to press for more state funding of water improvement initiatives.

“We’ll work over the interim and see if we can come to some consensus and we’ll come back at it again next year,” Reynolds said.

And Reynolds has indicated she’ll appoint a committee to review government pension systems. Branstad has been suggesting it’s time to shift to a front-end, defined contribution plan, like a 401k. The state and employees both contribute to pensions managed in the Iowa Public Employees Retirement System, but a defined benefit, like a pension as the worker hits retirement, is the result.