You are here: Home / Crime / Courts / 911 call made by Chris Soules at accident scene released (audio) 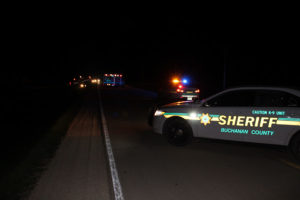 The reality TV star who is charged with leaving the scene of a fatal traffic accident in northeast Iowa called 911 shortly after the crash Monday night.

The Buchanan County Sheriff’s office has released audio of the 911 call from 35-year-old Chris Soules.

The call lasted nearly five-and-a-half minutes and Soules identified himself to the dispatcher. Soules gained fame on the television show “The Bachelor” and later on “Dancing With The Stars.” Police say Soules was driving a pickup that rear-ended a tractor north of Aurora around 8 p.m.

The driver of tractor, 66-year-old Kenneth Mosher of Aurora, was killed in the crash. “Is anybody injured?” the dispatcher asks on the 911 call. “Yes, I ran into a guy on a tractor,” Soules responds. Late in the call, Soules relays to the dispatcher that other people were administering CPR. Police accuse Soules of leaving the crash scene before officers arrived. They say Soules was arrested at his home near Arlington, about 10 miles away from where the crash happened.

Soules bonded out of jail Tuesday morning. Court documents show alcohol containers were found in Soules’ pickup at the scene.