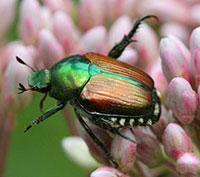 With all the fuss about musician Paul McCartney making his first concert stop in Iowa in a dozen years, there’s news of looming trouble with another beetle, the creepy-crawly kind.

Entomologist Robert Wright says conditions appear favorable this year for a wider infestation of the Japanese beetle in Iowa and across the region. The bug can threaten Iowa’s top two crops and our gardens.

“It has just one generation a year. Right now, they’re in the soil as immature white grubs feeding on grass roots and plant roots,” Wright says. “The adults will emerge in late June and into July and that’s when we’ll start seeing the adults.”

Iowans have likely seen the bug but may not know it’s a Japanese beetle. They’re easy to identify. “They’re about a half-inch long with a bright metalic green head and shoulders and then the wing covers of the back are a coppery-brown color,” he says. The pests have been in the U.S. for nearly a century and here in the Midwest for perhaps 30 years.

Not only are they a threat to corn and soybean crops, but they can gobble up our gardens and landscaping. “Oftentimes when you’re gardening, you may see it attacking roses,” Wright says. “It likes things in the apple family. It’ll feed on crab apples. Linden trees are a favorite plant in terms of feeding on the leaves.”

Iowa’s farmers need to be on particular guard for the insect. “In agricultural settings, it can feed on both corn and soybeans,” Wright says. “It’ll defoliate the leaves in soybeans. It also will feed on the leaves in corn but it really prefers to feed on the silk.” He says the same insecticide used to control white grubs also works well on the beetles.