You are here: Home / Sports / Hardware awaits winner of Coe-Cornell 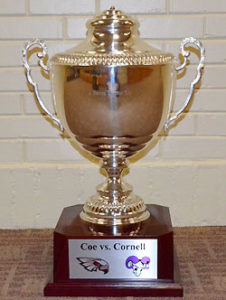 It won’t be just another non-conference game on Thursday night when Cornell meets Coe in a college baseball game in Veterans Stadium in Cedar Rapids. The outcome will determine the winner of the Bremner Cup All-Sports Trophy. The Linn County rivals are tied 7-7 going into the final head-to-head competition.

Cornell coach Seth Wing says the game is creating a buzz on campus.

“They decided to do this cup once Cornell left the Iowa Conference and moved over to the Midwest Conference”, said Wing. “We are really in a great position to win the cup for the first time. The school is fully behind us here and the guys are embracing the opportunity.”

The Rams enter the game having won nine of their last 11 and stand 13-14 overall. Coe is 19-13 overall after getting swept by Wartburg in a doubleheader on Tuesday.