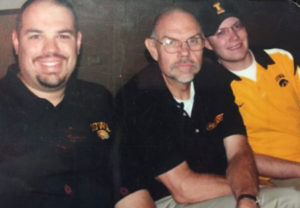 The Iowa City Police Department has released the name of the man found dead Sunday morning in a building across the street from the Johnson County Jail.

Police say the autopsy is still underway, but they are treating the death of 34-year-old Jonathan Wieseler as a homicide. Wieseler worked for Lederman Bail Bonds in Iowa City, but was a native of Sioux City. Long-time friend Brian Vakulskas, says he always mentions Wieseler at the end of his book review show “Having Read That” on KSCJ radio.

“He had a very good knack of finding humor in all kinds things, as do I. And he also read just a ton,” Vakulskas says. “He attended law school, had no interest in practicing law whatsoever. His love of books coincided with mine, we liked the same things.”

Weiseler moved to Iowa City in 2001 and worked for the bail bonds company. Iowa City Police say in a news release they expect to have the preliminary autopsy results available today, but are not releasing any other details on the murder.

The police department has asked for the public’s help and encourages anyone with information on the crime to call them. They are particularly interested in what happened between the hours of 9 p.m. Saturday, April 22nd and 11:11 a.m. Sunday April 23rd when Wieseler’s body was found.