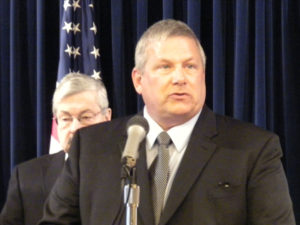 Iowa Ag Secretary Bill Northey during a recent news conference with the governor.

“I certainly look forward to working with him. I don’t know what role that might be,” Northey said. “…I certainly would love to work with him as Iowa Secretary of Ag. If there’s another job offered, I’d be very willing to consider that as well.”

Northey ruled out running for the U.S. Senate in 2014 and cited his desire to continue working his family farm near Spirit Lake back. If Northey joins the U.S.D.A., he’d likely quit farming.

“I love living in Iowa. I love being here close to family and close to the farm,” Northey said. “If I was offered — and I have not been offered — but I was offered something, that would absolutely be part of the consideration as I’d likely have to give up my farming interests to be able to do that just because you have some connection to decisions that could impact that farm.”

Northey started farming with his grandfather in 1981. He’s raised pigs and cattle in the past as well as row crops. Northey has continued to plant and harvest corn and soybeans in the past decade as he’s served as the state’s ag secretary.

Northey repeatedly stressed to a group of reporters on a conference call today that he has not been offered a job in the U.S.D.A.

“It could be worthwhile enough in the kind of difference that you could make and the interest and experience that would be that it would be worth stepping away from the farm for,” Northey said. “But I don’t know what that is and we’ll certainly cross that bridge when we come to it.”

“Very open, very engaged,” Northey said of Trump. “Lots of different issues that you would expect came up.”

Northey stressed the importance of ag exports to Mexico, especially pork shipments. Northey also brought up corn-based ethanol during his two-minute presentation to the president.

“I mentioned that I was from Iowa, I mentioned that we’re a big ethanol-producing state,” Northey said, “and before I could even make an ask on ethanol, the president jumped in very quickly and said: ‘You know I’m a big supporter of ethanol.'”

The president’s proposed 21 percent budget cut in “discretionary” U.S.D.A. spending did not come up during the roundtable, according to Northey.

Iowans have had key roles in the U.S.D.A. over the years. Former Governor Tom Vilsack served as President Obama’s ag secretary for the past eight years. Tom Dorr, a farmer from Marcus, Iowa, joined the U.S.D.A. in 2001 after George W. Bush took office. Dorr served as Undersecretary for Agriculture and Rural Development. There’s already an Iowan inside the U.S.D.A., too. Sam Clovis of Hinton, a former Morningside economics professor who worked on Trump’s presidential campaign, has been serving on what he called a “beachhead team” inside the U.S.D.A., working on the transition between administrations.