You are here: Home / News / Solar farm in Clarke County near Osceola dedicated 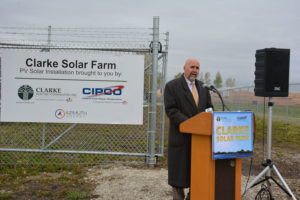 The Clarke solar farm near Osceola was dedicated Wednesday.

CIPCO Vice President of Communications Kathe Breheny says the farm is one of 5 in their solar project. She says the Clarke site will have enough capacity to fully power 63 homes each year, generating more than 636,000 kilowatts of energy.

The total project is expected to generate 5.5 megawatts of power, making it the state’s largest operating solar system.

We’ve had many days in the early part of this year where the state hasn’t seen a lot of sun. Breheny says that does have some impact on output. “The solar fields do still produce on an overcast day. Obviously the output is not nearly what it is when the sun is shinning,” she says, “but they do sill produce when the clouds are out there.” The other solar fields are located in Urbana, Wilton, Pella and Marshalltown.

CIPCO serves 13 electric cooperatives and associations spanning 58 of Iowa’s 99 counties, covering a territory which stretches 300 miles diagonally across the state from the Mississippi River on the east to Shenandoah in the southwest.