You are here: Home / Sports / A few Iowa Cubs to get World Series rings tonight 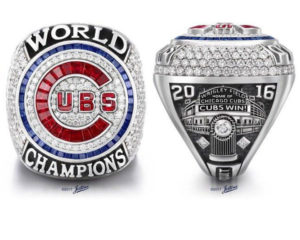 A ring ceremony will be staged on the field before the Iowa Cubs game this evening in Des Moines.

The Chicago Cubs beat the Cleveland Indians last fall to win the World Series, but team members didn’t get their commemorative rings until earlier this month.

A few of the Iowa Cubs who spent time up on Chicago’s roster last season will get 2016 World Series Championship Rings tonight.

Iowa Cubs owner Michael Gartner and Sam Bernabe, the long-time president and general manager of the Iowa Cubs, are getting rings, too. The triple-A franchise in Des Moines has been associated with the big league Cubs since 1981.

The Chicago Cubs’ World Series rings have the iconic “C” logo made out of rubies and sapphires. There are also 108 diamonds — signifying the 108 years between World Series titles for the club.