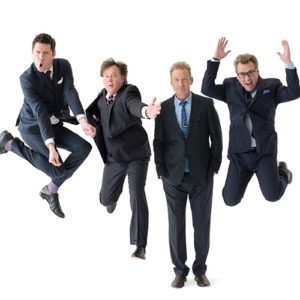 Four cast members from the Emmy-nominated TV show “Whose Line Is It Anyway?” are making one stop in Iowa this weekend on their national improv tour.

Greg Proops has done improvisational humor for nearly 30 years, much of that time with many of these same performers. Proops says there’s no fear of having to go onstage in front of thousands of people with nothing at all prepared.

“If you had the kind of ego that we have and the crying need for attention from strangers and the approval of a room full of people you don’t know every 15 to 30 seconds, then you would understand,” Proops says. “We’re eager to get out there. Not having a script is the fun part for us because we don’t have to memorize any lines, so it’s, in one way, less work.”

Audiences often come up with some ridiculous things for the actors to perform, like milking a cat or vacuuming the head of Elvis using an earthworm.

“You take whatever the audience gives you, you can’t parse it too much or try to manufacture it,” Proops says. “I think that’s the fun part, hearing what people have to say. Every once in a while, I’m surprised at how literate and well-read a crowd is. Often, crowds will only know one book, like ‘Fifty Shades of Gray’ or something. But the other day we were playing somewhere and got all kinds of great suggestions.”

Proops is being joined in Iowa by cast members Ryan Stiles, Jeff Davis and Joel Murray for the 90-minute free-for-all.

In one finale of previous shows, the actors had to take off their shoes and socks, put on blindfolds, and perform some mundane task on a stage filled with hundreds of live mousetraps. While audiences loved it, Proops, not so much.

“I have scars and I wake up screaming,” Proops says. “It does hurt, it bloody well does hurt and not even having the mousetrap close on your toes is the hard part, it’s stepping on the little buggers.”

The show called “Whose LIVE Anyway?” will be at the Des Moines Civic Center tonight.