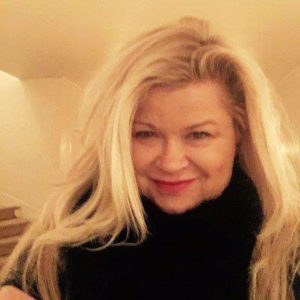 A University of Iowa graduate who’s been in Oprah Winfrey’s orbit for the past two decades was back in Iowa City yesterday for a “Life with Phil” event — about philanthropy.

“I believe in quantum physics…What you give out does come back to you, exponentially,” Sheri Salata said during an interview with Radio Iowa.

Salata was the executive producer of “The Oprah Winfrey Show” and president of Harpo Studios. Salata’s Thursday afternoon address to students emphasized that giving to others is a way of giving “meaning” to your own life.

“If you can, early on, begin to understand that making meaning a priority in your measure of success, your life takes a very, very, very different turn,” Salata told Radio Iowa. “And at the end of your days, which is hard to see when you’re 19, 20 and 21, that is going to be one of the key measures of success for you, no matter what else you have accomplished.”

Salata graduated from the University of Iowa in 1980. Her daughter is now a student at the university. Salata doesn’t remember having the same kind of committment to philanthropy as a college student that she sees in her own daughter.

“I don’t think I had the vision for it like she does and her peers do,” Salata said. “I think what changed that for me was working at ‘The Oprah Winfrey Show’ because that was just embedded in our work.”

Salata, whose first job at Harpo in Chicago was as a promotions producers, said she had a “front row seat” to the personal commitments Winfrey and her staff made “day in and day out.”

“I began to see very quickly…it was a company benefit, just like insurance or vacation days,” Salata said Thursday.

Salanta, who calls LA home these days, emphasized that philanthropy is “far more than check writing,” but extends “energy,” a “point of view” and spiritual development to the giver.

Salata’s Twitter profile says she is “in daily pursuit of freedom, growth and joy.” A year ago, Salata resigned as president of the Oprah Winfrey Network (OWN) to start her own media company, which also specializes in branding. OWN is one of her customers.