You are here: Home / Fires/Accidents/Disasters / Workers who died on the job remembered at events across the state 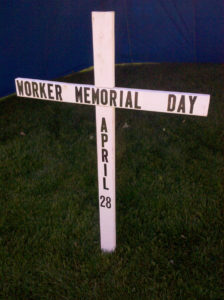 Today is “Workers Memorial Day” and 10 ceremonies are being held around the state to remember workers who’ve died on the job.

According to the Iowa Labor Commissioner, 34 people died last year while they were working in Iowa. Ken Sagar is president of the Iowa Federation of Labor.

“There are 34 families from last year who have a date that’s indelibly burned into their mind, where there was a before and there was an after – where somebody was there and now they’re gone,” Sagar said.

He was among the speakers at a midday ceremony held in Des Moines to honor those workers and the families they left behind. Among the workers who died on the job in Iowa last year were five Des Moines-area police officers. Three were killed in traffic crashes caused by other motorists and two were killed in ambush-style attacks by a gunman.

“There’s no explanation for it,” Sagar said of the deaths of the law enforcement officers. “Auto accidents…or being stalked and murdered in the line of duty, it’s all unacceptable.”

At least eight of the workers killed on the job in Iowa last year fell from a ladder, scaffold, wind tower, or roof. Sagar says workers typically go through a lot of training on guidelines and rules for such jobs.

“Sometimes, you know, rather than asking for help or otherwise trying to get the job done in the most safe manor – some people think ‘if I can just reach another three inches, I can paint that last little bit.’ It’s never worth it. There are no shortcuts when it comes to safety,” Sagar said.

The first Workers Memorial Day was held in Iowa in 1989. Sagar hasn’t counted how many years he’s been involved in the annual ceremony. “The short answer would be too many,” Sagar told Radio Iowa. “What I would really like is to have a Workers Memorial Day where we celebrated the fact that no one died on the job. Regrettably, 150 or so folks – every day in this country – die from preventable accidents and that’s just way too many.”

There were also midday gatherings in Bettendorf, Clinton and Iowa City to remember workers who died on the job. Workers Memorial Day events will be held this evening in Cedar Rapids, Council Bluffs, Dubuque, Sioux City and Waterloo. On Saturday evening, there will be live music at the Keokuk Labor Temple to mark the occasion.