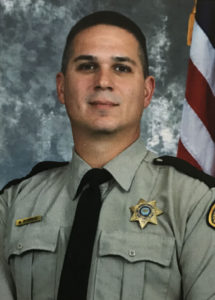 A jail inmate stole a sheriff’s deputy’s gun and used it to kill one deputy and wound another in western Iowa Monday. It happened shortly before 11 a.m. as the inmate was being unloaded from a transport van back into the Pottawattamie County Jail.

Sheriff Jeff Danker says the inmate assaulted the two deputies and escaped. “The perpetrator obtained one of the deputy’s firearms and shot both deputies. He was able flee the sally port, which was where they were transferring the prisoners, in the jail van,” Danker said at a news conference late Monday afternoon.

The inmate, 23-year-old Wesley Correa-Carmenaty, crashed the van through the closed garage door. One of the deputies, 43-year-old Mark Burbridge, died from his injuries. Deputy Pat Morgan, 59, was shot in the lower torso and is expected to recover.

Danker arrived at the jail not long after the gunfire. “You walk in there and…that van has crashed through the door, you’ve got two deputies laying on the floor getting aid – it’s a shocking scene to walk into,” Danker said.

There are cameras in the area where the shooting occurred, which should help investigators piece together how the deputies were attacked. “As with anything, cameras don’t catch everything,” Danker said. “We are reviewing those…we should be able to get an idea of the whole turn of events.”

After he escaped in the van, Correa-Carmenaty allegedly shot a Council Bluffs man, 30-year-old Jerry Brittain, in an attempted carjacking. Brittain was treated for non-life-threatening injuries. The inmate eventually ditched the van and stole a woman’s car at gunpoint. Thirty-one-year-old Amy Kanger of Glenwood was forced to ride in her own car before she was released outside a liquor store in Omaha.

Pottawattamie County Attorney Matt Wilber said Correa-Carmenaty showed no remorse in court for the man he killed during a robbery. “They asked him if he had anything to say and he basically just said the gentleman had died because he was an idiot,” Wilber said. “He had no remorse. He was cold through the entire sentencing hearing.” The victim’s mother was in court and had to leave because she was so upset, according to Wilber.

Thanks to Karla James for contributing to this report