You are here: Home / Sports / Logano charges from the rear to win at Richmond 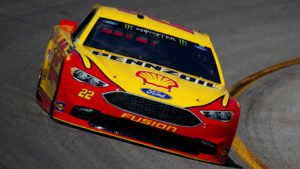 Joey Logano went from last to first to pick up his first win of the year by beating teammate Brad Keselowski to the checkered flag at Richmond. Logano had to start from the back of the field because of a pre-race transmission change. He led the last seventeen laps.

The race was the 300th in Logano’s career in NASCAR’s top series. He is the sixth driver in NASCAR’s sixty-year history to win his 300th start.

Matt Kenseth, who started on the pole and led the first 163 of the race’s 400 laps—the first laps he has led this year, ran into late-race problems and came home 23rd.

NASCAR moves from the short tracks to its longest and fastest track next weekend—Talladega Motor Speedway in Alabama.