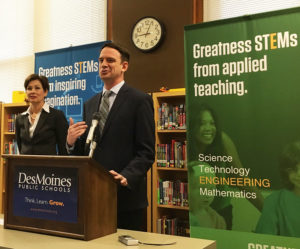 The director of the Iowa Department of Education said his agency will start developing guidelines for computer science, at all grade levels.

Ryan Wise will convene a “working group” at the end of this month to tackle issues like how best to teach computer skills to kids in the early elementary grades.

“In addition, the state Board of Education will ultimately adopt standards that set expectations for what students should know and be able to do in computer science,” Wise said.

A bill the governor signed into law last Friday encourages, but does not require Iowa schools to teach computer science. The new law creates a professional development incentive fund for teachers who want to gain new computer skills, but there’s no money in the fund. 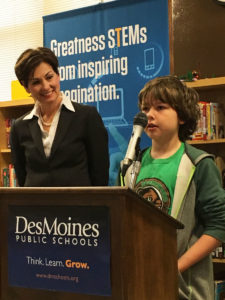 Wise spoke during a news conference this morning at a Des Moines school that already has an active “coding club” and other computer-related activities for elementary students.

Eleven-year-old Jack Keenan built a robotic arm with a couple of his classmates. “Mr. Burke taught us about coding in his classroom and then we all got real interested in that,” Keenan said. “…Close to the end of the year, he created a coding club where kids would come and we’d learn about Scratch coding and in fifth grade it evolved into Arduino coding which is a mini-computer that you can hook up circuits to.”

Keenan discovered he likes to build things and has decided he wants to be an engineer when he grows up. Lieutenant Governor Reynolds said she’s committed to providing the money next year so Iowa teachers can get professional training in how to mimicking these experiences in their schools.

“By building a strong foundation in elementary and middle school,” Reynolds said, “it helps students decide in high school and beyond whether they want to pursue a career in computer science.”

A few states, like Arkansas, require all public high schools to provide computer science classes and those classes count towards meeting math and science requirements for graduation. According to the National Conference of State Legislatures, about one-third of U.S. states have changed the definition of a “textbook.” It means schools in those states may use money reserved for “textbooks” to buy digital devices and software rather than a hard-cover book.