You are here: Home / News / ‘No guarantee’ on date of Branstad-to-Reynolds transition (AUDIO) 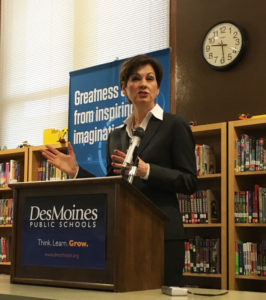 Lieutenant Governor Kim Reynolds this morning said it’s “likely” she will become Iowa’s next governor before the end of May.

Governor Terry Branstad will appear before a Senate committee tomorrow for a confirmation hearing. It’s a key step toward a full senate vote on his nomination to be U.S. Ambassador to China.

“We don’t have a date. We have no guarantee,” Reynolds said. “The hearing will be tomorrow. Hopefully, we’ll have a better understanding of the timeline after that, but right now, we don’t know.”

Reynolds said transition plans aren’t ready for public release yet. Reynolds will take the oath of office and has indicated she’ll name her own lieutenant governor.

“After the hearing, we’ll get some sense, I think, of what that timeline looks like and we’ll build off of that,” Reynolds said. “But at this point, we just don’t know. I mean, we have no idea.”

Branstad will resign as governor “fairly soon” after he gets confirmed by the Senate, according to Reynolds.

“We’ll be watching and, honestly, we’ll have a good idea after the hearing tomorrow I think what that timeline looks like. Senator Grassley had indicated, you know, possibly three weeks, but it’s still speculation at this point. We just don’t know. I mean, we’re at the mercy of the federal government and so anything is possible,” Reynolds told reporters, laughing.

Reynolds made her comments this morning during the Branstad-Reynolds’ Administration’s weekly news conference. Branstad is already in Washington, D.C.

Iowa’s attorney general has scheduled a news conference for early this afternoon to release his formal opinion on whether Reynolds gets the title of “governor” or “acting governor.” In addition, Attorney General Tom Miller will reveal whether he believes the state’s constitution gives Reynolds authority to name a lieutenant governor to take her place.