You are here: Home / News / ‘Off the cuff remark’ in November leads to Branstad’s expected exit (AUDIO) 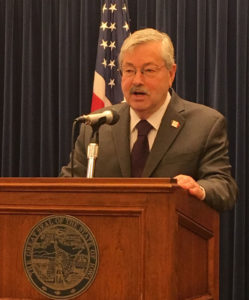 Terry Branstad’s historic tenure as Iowa’s governor is drawing to a close.

The first hint of Branstad’s exit came on the sixth of November, during Donald Trump’s final campaign rally in Iowa.

“He made some off-the-cuff remark like, ‘Well, Governor Branstad can take care of China,'” Branstad said, laughing during a Radio Iowa interview, “or something like that.”

On that Sunday in Sioux City, Trump started by saying “nobody” knows more about trade than Branstad.

“You would be our prime candidate to take care of China,” Trump said. “He has done so well, so well for the people of Iowa.”

“First thing I thought: ‘No way would Chris have any interest in doing this,'” Branstad told Radio Iowa.

Right after the election, though, the governor left for a previously-planned trade mission to China. While he was gone, Branstad’s wife, Chris, and the rest of Branstad’s family talked it over. When the governor returned from overseas, his wife told him she was “intrigued.”

Then, in early December, Branstad and his wife walked into President-elect Trump’s office in New York City.

“First thing (Trump) said is: ‘Your son, Eric. He did a great job. He was the state director for me in Iowa and I just love that guy. What’s his phone number? Let’s give him a call.’ And Chris and I looked at each other. We didn’t have our cell phones with us and we don’t have his number memorized, so that was kind of an embarassing moment,” Branstad said with a laugh.

“And then he looked at Chris and said: ‘Do you really want to do this?’ And she said: ‘Yes.’ And that was it.”

A couple of days later, on December 8th, Trump brought his post-election “thank you tour” to Des Moines.

“I am now honored to welcome our next ambassador to China, your governor…Terry Branstad,” Trump said a few minutes into the campaign-style event.

Trump invited Branstad on stage, calling Branstad “America’s longest-serving governor in the history of our country.” and noting Branstad has crossed the 23-year threshold.  Trump told the crowd as ambassador to China, Branstad would be working on “one of the most important relationships we have to improve.”

“It has been a great honor and privilege to serve the people of this state and, thanks to our new president who’s going to make America great again, I am very proud to serve America in this very important role,” Branstad said.

Branstad’s preparation for this new role started decades ago when he hosted a provincial official who is now China’s president. In 2012, Branstad hosted an elaborate banquet in Des Moines for Xi Jinping.

“Coming to Iowa brings back many fond memories,” Xi said in 2012. “In 1985, during my first visit to the United States, I visited the state of Iowa and that was my first direct encounter with the people of the United States.”

Through his interpreter that night, Xi said he wanted to “deepen the relationship between the Chinese and American people.” Branstad expressed similar sentiments as the governor and Xi, who was China’s vice president of the time, delivered formal toasts.

“Please join me in raising our glasses to our long-time friend give Vice President Xi Jinping and the long-lasting friendship between Iowa and China,” Branstad said.

Jinping replied: “Now I’d like to propose a toast to the health of Mr. Governor and Mrs. Branstad to our friendship and to an even better tomorrow of the China-US cooperative partnership.”

Now, after months of waiting, the Senate confirmation process kicks into high gear and Branstad could be confirmed as ambassador to China before the end of May. Branstad will appear before the Senate Foreign Relations Committee Tuesday for a hearing. A vote in the full Senate on Branstad’s nomination is expected soon.