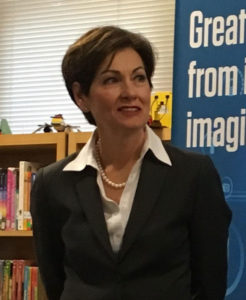 Lieutenant Governor Kim Reynolds today said “the law is on her side” and she is likely to name a new lieutenant governor when she becomes governor.

Iowa Attorney General Tom Miller, a Democrat, issued a formal legal opinion this afternoon that concludes Reynolds does not have the authority to select a replacement when Governor Branstad resigns and she is sworn in as governor.

Reynolds told WHO-TV she’s been making plans based on the statement Miller made in December, back when the attorney general originally said she would have the authority to appoint a new lieutenant governor.

“Iowans expect a governor and lieutenant governor and they’re just tired of the political games that they see happening in politics today,” Reynolds said, “and so I think it’s unfortunate.”

Reynolds, a Republican, spoke with WHO TV a couple of hours after Miller held a news conference to explain his legal reasoning. Miller cited similar situations in other states and comments made during the 1858 convention that produced the Iowa Constitution.

“They thought it was really important that the person who succeeded to the office of governor, by far the most important office in our state, be elected by the public,” Miller said.

Miller said if Reynolds appoints a new lieutenant governor, that person will not have been elected to the job.

Reynolds noted that as a state senator, she voted for the state law approved by the Democratically-led legislature and Democratic Governor Chet Culver that clarified the governor “shall appoint” a new lieutenant governor in just the situation she’s in now.

“We believe that the law is on our side and Tom Miller said he researched it and concurred with the secretary of state and our office back in December and I don’t think anything has changed,” Reynolds said.

The top two Republicans in the Iowa House issued a joint statement yesterday, accusing Miller of trying to “delegitimize” the state’s first female governor. Reynolds didn’t go that far in her interview with WHO TV, but she expressed disappointment in Miller’s opinion.

“I can’t tell you how many times people come up to me and say…’Who are you appointing?’ and ‘Are you thinking about this person?’ So I believe the sentiment of Iowans is there should be a governor and lieutenant governor. I’m a living example of how that’s going to benefit Iowans by a seamless and peaceful transition. I’ve had the opportunity to really serve in all capacity of the executive branch and I understand how the executive branch works,” Reynolds said. “I want that same type of partnership with the next lieutenant governor.”

It’s unclear exactly when Branstad may be confirmed by the U.S. Senate, then resign as governor and head east to serve as U.S. Ambassador to China — but it’s now likely to happen later this month. Reynolds has narrowed her list of choices for lieutenant governor to three, but isn’t revealing who is on that list.