You are here: Home / News / Republicans and Democrats at senate hearing give Branstad high marks 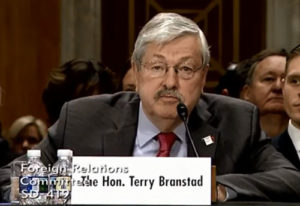 The reception Governor Terry Branstad got Tuesday from a key U.S. senate committee seems to signal he’ll easily be confirmed as U.S. Ambassador to China.

Branstad emphasized his long-term “friendship” with China’s leader. President Xi’s first trip to the U.S. brought him to Iowa in 1985 and he met Branstad in the governor’s office. In addition, Branstad emphasized the six trade missions he’s led to China during his past 22 years as governor. Senator Corker thanked Branstad for giving up “a very comfortable place” in Iowa.

“Apparently issues of reelection are not a problem,” Corker said.

Branstad and others in the hearing room laughed, then Corker continued, saying Branstad was going “to a post that’s much more temporary and yet in many ways far more meaningful in terms of our security and the world’s security.”

“You’ve done a great job and you’ve shown today that you’ve got a grasp for what’s going on over in China and I appreciate that,” Portman said.

“I’ve got good Democratic friends in Iowa who’d give you high marks,” Kaine said, “at least as high as they’re going to give to somebody from the other side,”

Branstad replied: “They keep reelecting me.”

Kaine continued: “I’m struck by that, too. I come from a state where they only give you one term (as governor)…You’ve had a pretty amazing track record.”

“Obviously my role as governor is different than my role is going to be as ambassador,” Branstad said.

But Branstad told senators that during a 1986 trip to “the old Soviet Union” he smuggled a book into the country and secretly met with “a group of refuseniks” to find out what was happening in Leningrad.

“I’m not bashful about meeting with dissidents or people that feel they’re being discriminated against or treated unfairly,” Branstad said. “I have a history of being willing to do that in my previous role. As ambassador, I think that’s even more important.”

As you can see, Branstad is talking in the past tense about his days as Iowa’s governor. Much of the committee’s discussion with Branstad centered on the nuclear threat in North Korea. Read more about the hearing here.