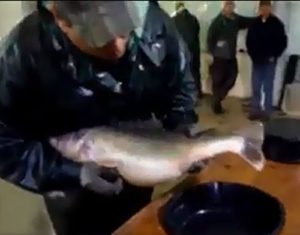 Preparing to harvest the eggs from a walleye.

Iowa’s two walleye hatcheries in Spirit Lake and Rathbun are filled to capacity after what the Iowa Department of Natural Resources says was a record hall in the annual collection of walleye eggs.

Chief of Fisheries Joe Larscheid says the DNR crews were out from April 4th through the 11th collecting the eggs that will grow into fish. He says conditions started out just about perfect with the waters around 44 degrees, and that brings the walleyes, muskie and northern pike into the lake shores to spawn, making them easy to net.

Larscheid says the fish populations in the lakes where they collect the eggs are in an up cycle right now. “On East and West Okoboji lakes, Storm Lake, Clear Lake, our populations are doing really well. And so there were lots of nice size brood stock fish — which are the big ones — that were running to shore this year,” Larscheid says. “And we were able catch a lot of them.. and meet and exceed our all-time record for egg take.”

Netting crews collected enough walleye to produce 1,116 quarts of walleye eggs for the Spirit Lake hatchery and 914 quarts for the Rathbun hatchery. “We’re going to stock almost 160 million walleyes this year in Iowa’s rivers, streams, lakes and impoundments. Most of those are fry, fish that are one to two days old, sometimes three days old after they hatch Some we raise to about two inches long and we stock almost one million of those, mostly into Iowa’s interior rivers,” Larscheid explains. “Then we produce another three to four thousand larger fingerling fish that we stock in the fall.”

Walleyes do naturally reproduce in Iowa lakes, but Larscheid says they need to stock large numbers of fish to ensure that population keeps up and there are enough fish that survive. He says they’ve done a lot of research on the fish that are stocked and they know it takes a lot of walleyes to be able to get enough to survive so someone can catch them and take them home.

Larscheid says it will take around four years for the young walleyes to grow to the legal limit size for anglers to hook. Storm Lake could be one hot spot for walleyes this year. The collection of walleyes at Storm Lake showed a large number of the bigger fish, with the average growth of the female fish increasing by an inch compared to last year.