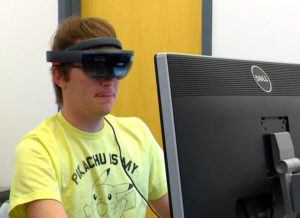 Ryan Krause wears the HoloLens while working on code for the game.

Some students at Iowa State University are likely having more fun than other students around the state — as they all scramble to finish class projects before the end of the spring semester.

That’s because the ISU students, in James Lathrop’s computer science class, are making a video game. It’s not your traditional video game.

Ryan Krause is among the students working with Microsoft’s HoloLens to make interactive holograms. “There’s just always new technology to keep up with and find new ways to make it fun for the people,” Krause says. The holograms create an “integrated reality,” allowing users to interact with the games in their actual environment.

Zachary Koehn, a senior at ISU from Atkins, Iowa, is among the group of students that spent an entire academic year developing a game from concept to finished product.

“In the first semester, you just end with a prototype. So, all you have is blocks…just a cube on the screen. But, now that we have all of our artist friends doing stuff — we have monster models, actual cards on the field — it looks good now. It finally feels like a game,” Koehn says.

Van Maanen is a 2013 graduate of Rock Valley High School. She’s now hoping to make a career out of what she’s learned at ISU. “I really do want to go into game design because it’s such a mixed media, so you get to touch everything,” Van Maanen says. The ISU students are scheduled to preview the final version of their game tonight at 6 p.m.